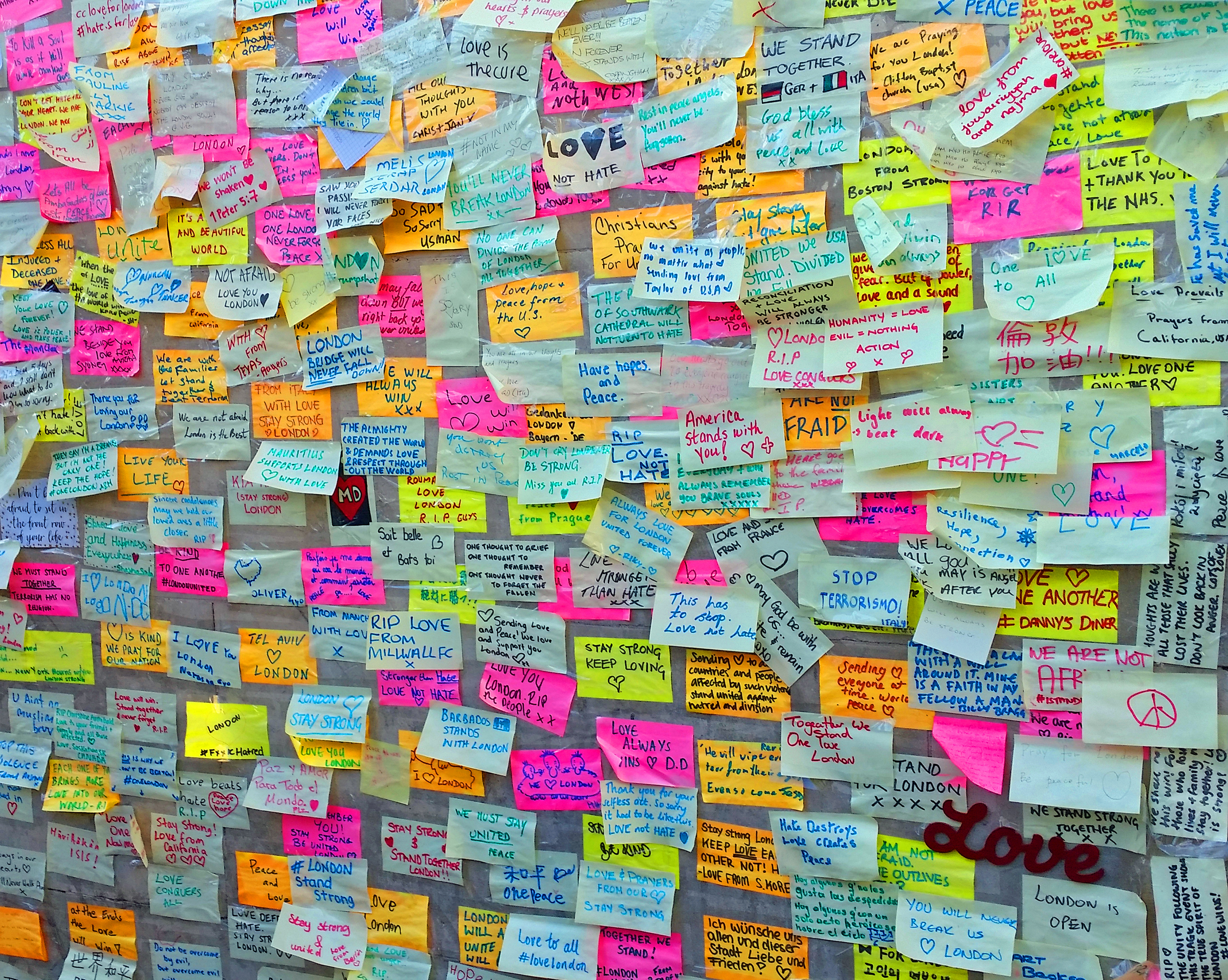 The murders carried out nearby London Bridge last night were not the work of religious men but members of a cult.

“This is for Allah,” shouted a perpetrator as he stabbed a girl at least 10 times, according to eyewitnesses.

“This is for Allah,” hollered the perpetrators as they ran into crowds, kicking and stabbing people, say eyewitnesses.

I missed this scene by about 10 minutes. Had I not chatted with my friend after seeing a show in the West End, then picked up a candy bar before getting on the tube to go to my stop (London Bridge), I would have been in the wrong place at the wrong time.

As it was, I got on the last train from Waterloo station that didn’t stop at London Bridge due to a “security incident.” Instead I went to the next stop and hopped a bus to backtrack. The sirens and helicopters sounded for hours.

This is the third terrorist incident within three months to happen in England, where I live now (following 17 years of living in Manhattan, including Sept. 11, 2001). All of them were conducted by those who claimed their actions were for Allah, whether or not they shared official ties groups like ISIS/ISIL.

I can’t imagine how regular Muslims feel when their religion, which is based on human welfare and accountability, has been twisted and perverted like this. 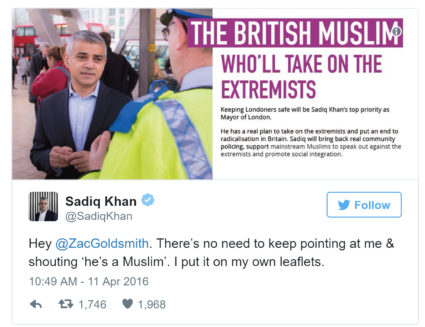 And there are many of them in London. In fact, Islam is the second most common religion in this city, right after Christianity. The Mayor of London, Sadiq Khan, is Muslim.

I live just over a mile from the East London Mosque & London Muslim Centre, which released a statement condemning the London Bridge attack: “…such acts of mindless violence can never be justified. Terrorism, irrespective of guise, is still terrorism. We come together in solidarity with all communities affected by this hatred … London has a long history of diversity and unity. We will not allow these attacks to change that.”

That organization seems to be very open-minded. “Promoting Tolerance and Opposing Extremism” is one of the sections within the Values & Mission statement on their website.

I hope we all share – and practice – this view.

The Muslims I know are normal. I am impressed with how they willingly participate in Ramadan, which started on May 26th and ends on June 24th. During this time, they will abstain from food and sex, among other things, to recognize those in need. It’s a challenge that they welcome with pride and determination. They generously donate their money the needy and celebrate the end of Ramadan by hosting community feasts. How they manage to operate in normal life during this period is a mystery to me. My NYC hairdresser told me Ramadan makes her happy because it is holy and in service to others.

This is wholly contrary to the message of the lunatics committing violence and murder in the name of religion.

I’ve always believed that the religion you are born into is based on geography. Whether you practice or not is based on your socialization within the family, at first, and then your own choice.

I believe formal religion’s primary purpose is to serve as a moral compass.

Did you know that Islam, Judaism and Christianity spring from the same source? I studied world religions in high school, college and through my own reading. I remember as a teenager, raised Catholic and attending a private school that was largely Protestant but run by Catholic nuns, that what I read about Islam and Buddhism really made sense to me. It seemed that they all shared the same message.

I hoped that one day I’d find a book that compared the major prophets of each “wisdom tradition,” a term I recently learned from Deepak Chopra. That day came about 10 years ago at the Rubin Museum of Art in Manhattan: “Jesus, Buddha, Krishna and Lao Tzu,” by Richard Hooper. (Unfortunately, Muhammad wasn't included.) As you may suspect, the common message of all prophets: Human relations are to be guided by love and kindness.

Amazing how, throughout the centuries and today, these wisdom traditions have been twisted and taken out of context to suit humans’ misguided and selfish ways. From sexual abuses and financial corruption to torture, murder and centuries of war, we have failed each other and ourselves. That’s the human side of our beings – the free will.

The religions are not to blame for these weaknesses, people are. Those who corrupt and are corrupted.

So how did the core teachings of Muhammad – which hold that “actions are judged by the intention behind them” and “one should not harm himself or others” – turn into a massacre that ended the lives of 10 people (seven victims, three attackers) last night? (The number could be higher as 21 people are in critical condition.)

They are not of true Islam. They have prostituted that wisdom tradition, exploited it for their own means.

Religious extremists are members of cults.

“Cult” has various meanings, depending on the context. Theologically, a group is defined as a cult if it identified itself as belong to a mainstream, recognized religion yet rejects or violates one of more of the central, essential teaching of that religion. This is true in the case of those who kill “for Allah.”

And the sociologically definition also is fitting: A group or movement may be a cult if it acts in ways that are illegal or otherwise unacceptable in a civilized society.

So what can we do about it?

1. Don’t believe the hype by misplacing blame on all Muslims. In situations of hate like this violence, it may seem easier to cope if we can direct our anger, sadness, frustration, and seeming impotence to an objectified source. If we can find something to fight, it seems to become real and actionable in a concrete way. But extrapolating the actions of a sub-set of sick people to a larger identifiable group is not fair. The association of the extremists to Islam is giving Muslims everywhere a bad reputation; we must separate the crazies from the wisdom tradition.

The fact that President Trump’s travel ban was based on religion instead of nationality shows that he has missed this point. It is totally un-American and violates The Constitution of the United States, which protects freedom of religion. The white settlers came to the U.S. to flee religious persecution.

The country is the result of a successful experiment in a strong ideology based on the goodness of people and freedom of choice. Immigration, diversity and tolerance united by common values are the hallmarks of the United States of America. I’m so sad about its current image and the actions being perpetrated there now.

2. Drop words like “mastermind” and “successful” in media reports. Legitimate news outlets use positive words to describe horrific scenarios. They’ll talk about the leader of a terror group as the “mastermind,” which can suggest an evil plotter, but also suggests that the person is smart, masterful and even mindful. Yes, evil people can have intelligence, but they are missing a lot of other basic, natural traits. Reporting a “successful attack” or stating that someone “successfully passed the security barrier” again places a good context on a tragedy.

As a former journalist who believes in the principles of the Fourth Estate, as it’s called in the U.S., I know our job is to report objectively and not editorialize. However, I find that throwing around such words is not neutral; there are better words. And, particularly for the talking heads on TV, stop sensationalizing and trying to showcase your emo side; it’s unprofessional and it violates the SPJ Code of Ethics.

3. Act human with others. A very curious thing happened on the sidewalks of New York City on Sept. 12, 2001: Strangers made eye contact with each other. This is very unusual in a bustling city. My take is that we were part of this common experience (tragedy) and our human nature sought connection. While the embers of the collapsed towers continued to burn for six months, this visual acknowledgment on the streets disappeared much sooner. It lasted only weeks.

We need this connection, and we need to acknowledge each other. (I covered this last week in Good manners can ease these polarizing times.) There is a great deal of positive energy, good words, and kindness happening in big and little ways each day, everywhere, yet these things don’t get the worldwide visibility of these evil acts. Think about it – Americans donated $358 billion to charity in 2014, corporate responsibility and cause marketing are in demand, and more and more people like you and me and learning how to be present, mindful, and conscious in life. I volunteer with an amazing organization, Alternatives, that puts on events and workshops in London supporting these ideals. And I just discovered Global Love Project, just one of many good (and free) resources to help us all enjoy a better experience.

What can we do in desperate times like this?

We do control our attitude and our effort. Let’s choose kindness, and that begins with good manners.
Our interactions can influence others for the positive. We have a lot of power. We choose how to exert it.

One of the London Bridge terrorists has left behind a wife and two children. I’m inclined to pray for them. And all the victims and emergency responders from that night.

And for all of us.

Update on June 5: Here's a great story on the British Muslim response and burden. Also, Just came back from the vigil at Potters Fields, next to City Hall. The big crowd included clerics from every faith, people of all ages and colors, and a massive showing by the Muslim community; it was very moving to have them there in such numbers and with beautiful statements on signs. Below are some photos I took. 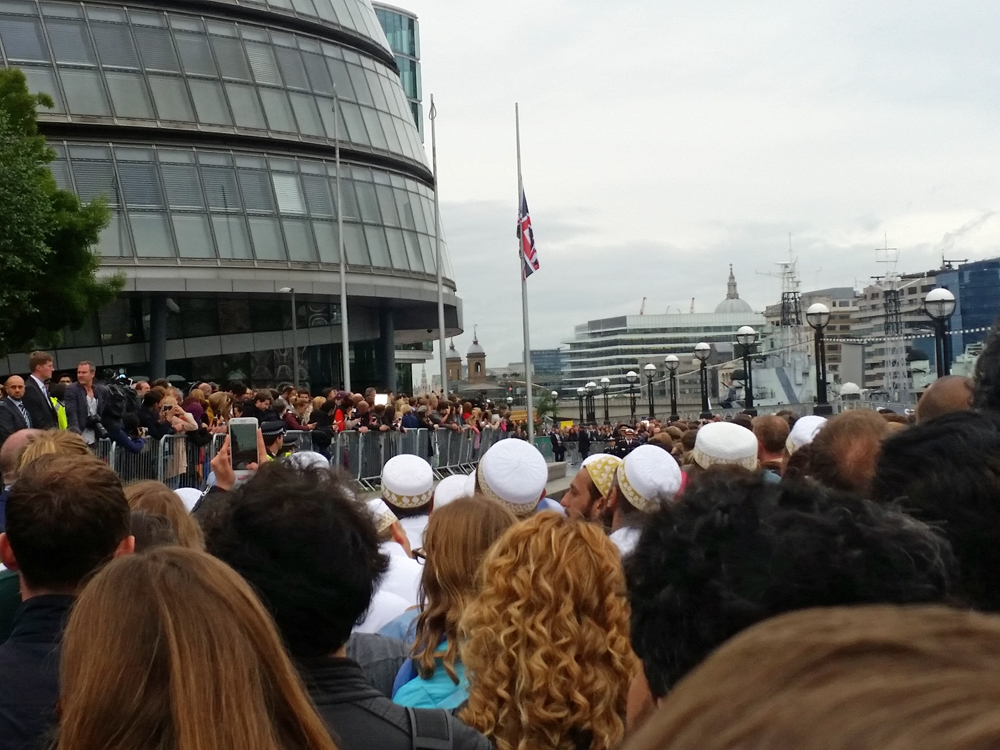 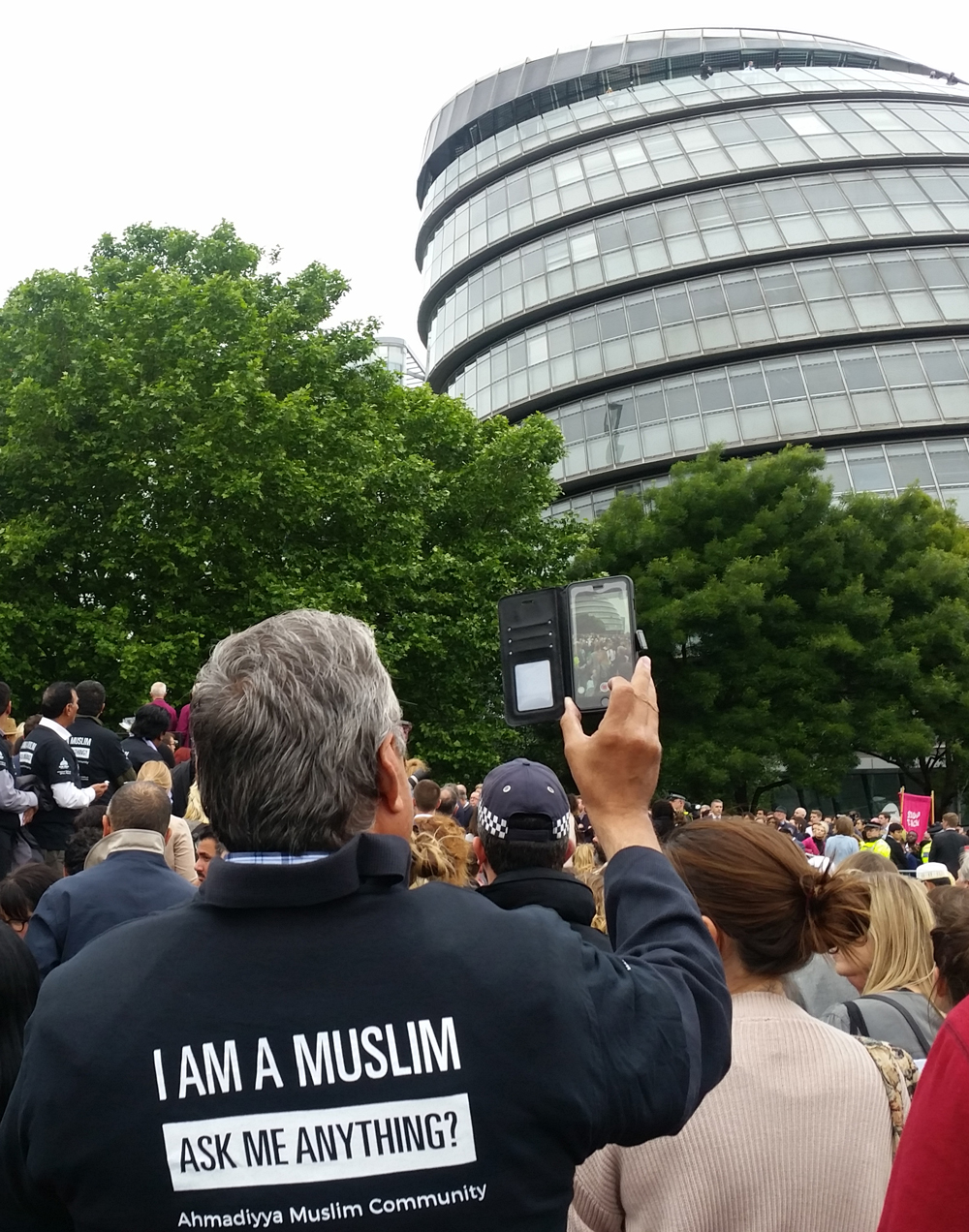 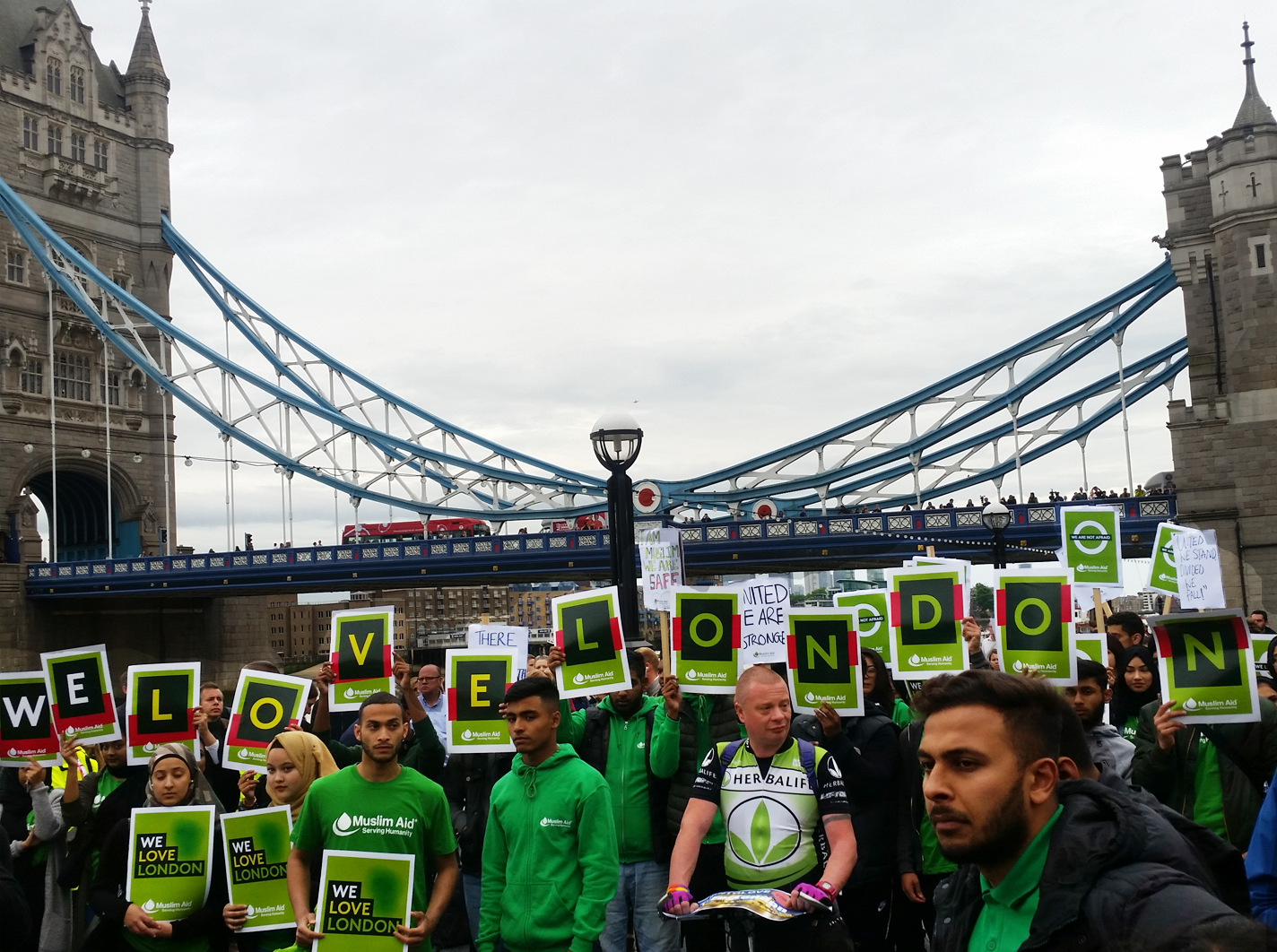 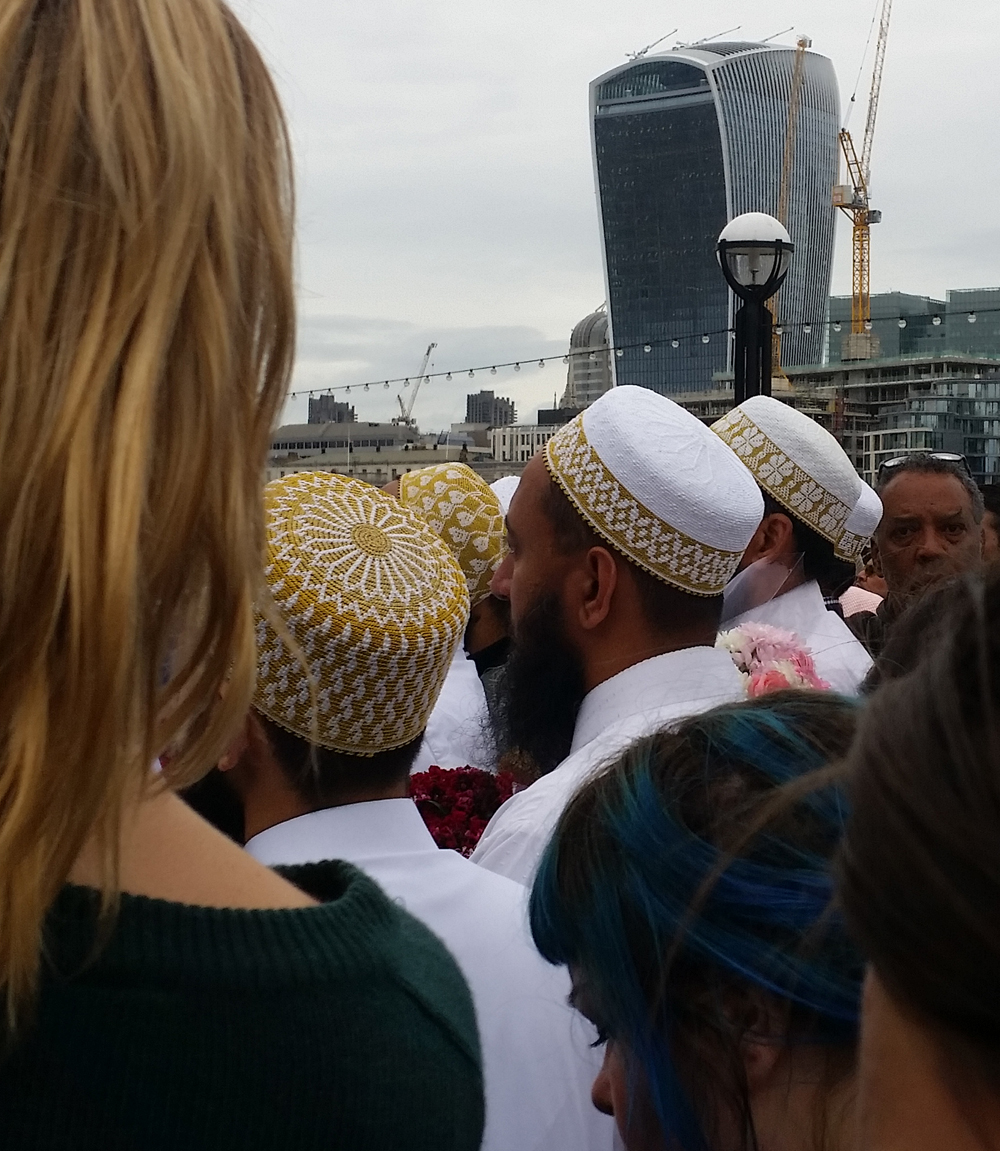