Last Saturday I finally acted on a long-held plan to get modular bookcases and other home organization items to transform my living space toward the streamlined, light, airy place I envisioned. This step was earned by sorting through clothes, linens, housewares, and memories to figure out what I could live without and then donating or tossing it. So I drove to the home goods superstore to fulfill my vision. Getting there was a challenge as I rushed up and down one-way streets, afraid of getting lost and unsure where this warehouse could be hidden in a residential neighborhood. I finally arrived and scored a parking spot within a minute’s walk of the entrance. Anxiety melted to relief. For a few minutes anyway.

Five minutes into my quest, I realized that for all the thought I gave to redesigning my living space, I had not given practical thought to timing my visit. It sure felt like the busiest day of the week and it was clear I wouldn’t be able to zoom in and out quickly.

Determined to bypass the forced procession winding through bedrooms, then kitchens, then children's décor, I decided to do it backwards. But there was no room to pass other shoppers’ carts and trying to steer clear of running children made it an obstacle course. Fighting the current is futile, I realized, and started over at the designated starting point. No shortcuts. There were the slow-pokes, the screaming babies, the dazed zombies … I was swearing under my breath as the fuse on my tolerance shortened. Shouldn’t have forgotten my patience and my earplugs at home, my mind raced.

Another 10 minutes into this stressful maze something gripped me: Making this an experience of pleasure or pain is a choice Tweet Buffertweetable text. I can continue frustrated and swearing under my breath at things beyond my control (slow shoppers, crowded conditions, long lines, noise pollution) or I can relax and be open to inspiration.

I chose the latter. And while I did spend nearly six hours there (two spent waiting on line to check out), I fulfilled my mission. Happiness.

As I drove away in my packed car from the warehouse, I was in no rush. Surrendering to the process had worked. I remained stress-free.

A few blocks away at a busy intersection, the light turned green so I inched forward and caught a glimpse of a young girl of about five years old standing off the curb in the street. A moment of panic arose for her safety, but she was under the gaze of her mother, who stood on the sidewalk. The girl crouched to the pavement and set down something she had cradled in paper towel. 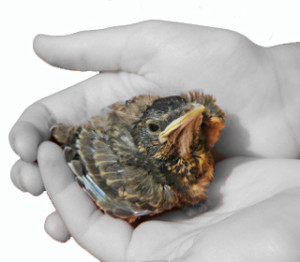 A small brown sparrow sat there. Immediately another sparrow flew in to join him and I could hear them chirping excitedly. They hopped around and the visiting bird flew off. The second one attempted to get air but couldn’t. The girl dashed to his rescue (clearly for the second time!) and gingerly scooped him up, presumably to further nurse his wing back to health.

As I drove down the street, I glanced in the rearview mirror with tears in my eyes and said a prayer for that bird and another for that girl.

What a sight! Such a beautiful interaction. Would I have caught it if I had remained so wound up in my earlier frustration?

This moment so inspires me! The care. The hope. The love.

Posted in Stories and tagged animals, being present, kids, NYC.