In this city of 9 million residents and millions more of tourists, it’s easy to go through the motions and errands of each day anonymously. Locals are adept at getting in and out of places quickly. We walk purposefully, eyes down, and we’re often in a rush. We know how many seconds it takes to cross the street as the crosswalk indicator blinks and how many inches we need to squeeze by the tourists and strollers on the sidewalk. And, yes, we’ll walk in the gutter if it means getting there faster!

This pace combines with tech conveniences – like hitting the ATM instead of dealing with a teller, or scanning a PayPass at checkout instead of exchanging cash with the attendant – for an experience that reduces the need for human interaction. It’s easy to skip conversation and eye contact. (And it’s discouraging after an attempt that’s met with a mere grunt from behind the counter.) 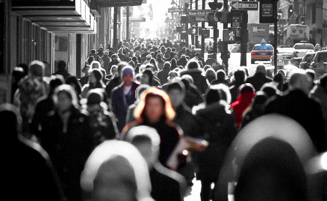 But I’ve noticed a change. Not sure if it’s “me” or “we.” But I’m sensing things are changing. For the better.

In the last 24 hours, I had three interactions with store staff.

In all these cases, both the staff and the customer (me) connected. We shared eye contact and a few words. We all felt better for it.

What the first young lady at the drug store didn’t know was that I was feeling disappointed – I had just come from an important meeting that was slated for two hours and lasted 10 minutes. I had done a great deal of preparation for it and was crestfallen that it seemed all for naught. She lifted me up – just when I needed it!

The coffee shop exchange provided an unexpected affirmation for both us. Common courtesies are appreciated.

The ice cream stand scenario was about the server feeling better after a negative exchange. Whatever the situation, she needed to share this frustration and did so with me. Empathy is easy to give.

Personalizing a routine experience by connecting through eye contact and a couple of simple comments has such power. It creates positive energy. Tweet Buffertweetable text

Also, the three ladies I connected with were open and friendly personalities in their early 20s. It gives me hope that this generation of digital natives knows how to be social offline.