Catch it while you can: TheLastShip.com

"The Last Ship" is so moving, evidenced by the feedback of fans on Twitter and Facebook. People share openly that their lives have been changed by this production. Pretty incredible testament for a two-hour musical. There are many dimensions so it strikes people in different ways. (See "The Last Ship" is a gripping tale of three types of love for my own take.)

I've seen it twice and must catch it again before it closes.

This story and characters are so impactful because of the tremendous talents on stage. Seeing "The Last Ship" was imperative because I'm a lifelong fan of Sting's music. Imagine my surprise -- and delight -- when I showed up on Dec. 16 to see that he was appearing in it as Jackie White! The audience's applause drown out the first few lines of the opening song as Sting appeared and sang solo.

Sting took over the role from Jimmy Nail, who was originally and fittingly cast for this role, to boost ticket sales. I would have loved to have caught Nail's performance, too, because he seems the perfect touch of tough and soft at the right age for his character, based on the CD recording. [Great three-minute interview with Sting and Nail on BBC.com.]

Michael Esper's Gideon is so compelling, and he didn't seem to play the role as much as live it. The first time I saw the show I had scored second-row tickets in the box office lottery at great savings and an even better view. I saw the spittle fly from his lips as he spat brusk words to his father. I saw tears in his eyes as he swayed in a dance of promise to Meg ("When We Dance" is my favorite tune on the CD).

Esper conjures all this passion for each performance. It must be exhausting, and it is wildly worth it to the audience. He's touched so many lives with this role and story, as evidenced on the Twitter and Facebook pages of The Last Ship. [Excellent article on Backstage.com where Esper discusses playing Gideon.]

Esper's performance has stuck with me so that he appeared in my dream last night! (More on that here.)

Collin Kelly-Sordelet made his Broadway debut as the young Gideon and Tom (Gideon's son). It's hard to believe that he isn't a veteran of the pro stage. His singing voice could transform anything to a lullaby.

Rachel Turner, an acclaimed theatre actress and singer from Belfast, is an amazing force. Her voice is of an angel, and she's got just the right show of softness, strength and wit as Meg.

I was sure Fred Applegate had to hail from Ireland or a British isle when I heard him as Father O'Brien. His performance is astonishing as he carries out the work of guiding this community, even if it means breaking the law.

Aaron Lazar plays Arthur, who is perceived by the rest of the shipyard men as having sold-out, with dignity and grace. His pronouncement to Meg of his love and vision for their future makes any girl swoon. Dreamy.

I loved Sally Ann Triplett's Peggy White. Dawn Cantwell, who plays the young Meg, and the rest of the company are exceptional singers and actors.

An interesting dichotomy of this production is the stark cold set of a ship's hull yet the warmth, spirit and love of the story. I laughed and I cried throughout this profound production. It has shifted me toward the better, and it will stick with me forever. 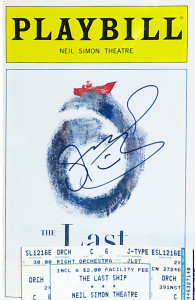 I met Sting as he arrived at the theatre before my first showing of "The Last Ship," and he graciously signed my Playbill. After the show I realized that Esper and others had walked past me. If I'd only known then, I would've loved to have met them.

BRAVO to Sting for the courage to write the story and compose the music and lyrics. The brilliant script was composed by John Logan and Brian Yorkey, and Rob Mathes led the music. Director Joe Mantello and choreographer Steven Hoggett are to thank for this beautiful and moving piece of art with real-life impact.

"The Last Ship" made me a fan of each of these actors and those behind the scenes. I look forward to their future work.

The score's on constant playback in my mind.

I was drawn to the show because it featured Sting's own story and music. His music has impacted my life since I first heard The Police. I remember buying the Ghost in the Machine in 8th grade; might be the first record I ever bought with my own money. I still have it.

I've seen Sting perform more than any other musician, both with The Police and solo -- and I've seen a lot of bands, from ABBA and The Clash, The B-52s, The Replacements, New Order, and the Grateful Dead, to Maximo Park, Of Monsters and Men, Imelda May, and many more. Two shows with special significance were one of the first Police shows I saw (line-up was 10,000 Maniacs, R.E.M., and The Police, perhaps in 1982) and the very last Police show at Madison Square Garden (where Sting shaved off his beard that had grown throughout the farewell tour).

Imagine my thrill meeting Sting outside the stage door before the show on Dec. 16. I was so overcome in the moment I forgot to express the most important sentiment, "Thank you for the music!" (I since mailed him a thank-you c/o the theatre.) When I had asked Sting if we could take a photo, he was very warm and gracious about it. My friend snapped the photo, seemingly, but no image registered. Crushed! I do have the memory and experience.

Music is most powerful to me, whether I'm hearing it or making it (singing or playing piano). And Sting's compositions, from pop to jazz to Broadway, has moved me so. I purchased the "The Last Ship" piano songbook by Sting. It doesn't have all the tunes, likely for rights reasons, but I hope to get the missing songs somewhere (any ideas?).

Great art moves us. It leaves an imprint.

Thank you to all who were involved in creating, producing and presenting "The Last Ship!"