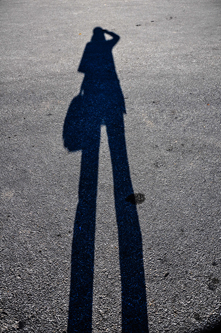 Everyone I know is struggling with the shock, horror and sadness surrounding the Metro-North commuter train accident that killed five people last week in Valhalla, N.Y. Reports say it will take one year to understand how an S.U.V. got stuck on the railroad crossing moments before a train traveling nearly 60 m.p.h. came barreling through, smashed the car, lifted the third rail into the carriage ... and made our hearts heavy.

Did the signal at the crossing indicate to traffic to stop? Did it do so in time?

There are so many variables that play into creating the conditions for this tragedy.

Many question the "decision" made by the woman whose car was stopped on the tracks.

We may never know the answers and, sadly, the answers are irrelevant. But it's our nature to wonder because we're puzzled and trying to make sense of this.

My heart is heavy picturing the scene. The urgent confusion of this woman as she tried to resolve an impossible dilemma. The desperation of the conductor as he engaged the emergency brake. The instant of explosion that killed some, and maimed and burned others. The insufferable view held by the witnesses, still sitting in their heated cars at the crossroad or those in the seven other train carriages who were screeched to a halt.

FAMILIAR STRANGERS
Seeking to understand or connect somehow, I read several news stories and looked up the LinkedIn profiles of those who had passed. Perhaps because it feels to "close to home." I know lots of people who commute into Grand Central Terminal. The people in these news reports don't feel like strangers. Any of them could be standing next to me at the register during lunch, or walking side-by-side with me up Park Avenue on the way to Grand Central, or sitting next to me on a peak hour train to the suburbs.

I mean a LinkedIn Connection -- do we have any business colleagues in common? (In the philosophical sense I believe all of us are connected, but I'm speaking in a practical sense.) I read each person's profile, when available, and I'm so saddened by the brilliance we've lost. Specialists who have contributed great things to our society, from science and art to finance and commerce. I discovered that I share one acquaintance with one of the poor souls who lost his life on that train.

I feel for the victims and for their families, friends, coworkers, and everyone touched by this accident.

I have to believe it was just that: It was not meant to be. How could it be? It's too hard to fathom.

FAUX FATE?
As someone who has come (finally) to believe "what's meant to be will be," it is exceptionally tough to process that somehow an accident like this is part of the plan.

We heard plenty of stories about Sept. 11, 2001, when some people just happened to change their plans and go to work at the World Trade Center either late or not at all. They lived to talk about it. They "dodged a bullet," as the saying goes. It wasn't meant to be.

But what about the people who did go to work on time? Who didn't get out in time?

Was it meant to be for them?

I have a hard time understanding this intellectually. A woman who attended college with me, one year my junior, was engaged to be married that December. How was that not meant to be?

Faith is easy to have when things are inconsequential. Should I order the omelette or the wrap? Should I wear the red top or the blue sweater? Should I go on this trip?

But what if a decision is as consequential as life or death?

It's scary to imagine having to bear that responsibility, yet we do when it comes to medical care or driving after drinking or any number of things.

Faith is hard to muster when bad things happen.

It is easy for tough moments like this tragedy to cast a shadow over all moment. To doubt faith in people ("the public"), systems, technology, etc. To feel anger. To feel despair. To feel afraid.

These feelings are understandable; for a time.

SHADOW-LIFTING
All any of us can do is BE PRESENT each moment.

It's not easy. In fact, it is tough. It requires discipline, focus, "fake it 'til you make it," calm, and determination. And openness. And look-you-in-the-eye connection. And a smile.

Perhaps all of the people on the train that day last week were living in the moment. Those stopped in their cars were singing along to the radio. Those in the train were chatting as usual with their commuting buddies, or engrossed in their Kindles, or texting about dinner with family or friends.

And we can't change them. All we've got are the moments ahead.

While the tough moments cast a shadow, we are forced to learn how to live with them.

And then we have a choice: Can I make the most of This Moment?

Let's take the challenge of trying to Be Present. For ourselves, those we are sharing it with, and for those who no longer have it.

My prayers go to all of those who have been touched by this tragedy.

UPDATE, Feb. 10: Richard Branson's blog today reminds us we are "human BEings not human DOings." Click here to read it.