Block Island lies 12 miles off the coast of Rhode Island, yet it's a world away.

It's the kind of place where paved roads turn to dirt and then to sand; beaches are imprinted with feet, paws, hooves, and talons; the ocean scent and sound of waves surround; and passers-by look you in the eye and smile.

It's the kind of place people escape to lose the everyday. And to find themselves. It has a grounding force. It refreshes the soul, if you let it.

Block Island roadways lead from pavement to dirt to sand to ocean.

The experience on Block Island is a little tough to explain to those who haven't been here. They wonder how you could fill your time on an island with one main strip of stores and restaurants. There's no Starbucks, but there's Juice 'n Java. There's no CVS, but there's Essentials inside The National Hotel. There's no Multiplex Cinema, but there's the Empire Theatre that dates from 1882.

Those who have been here get it. 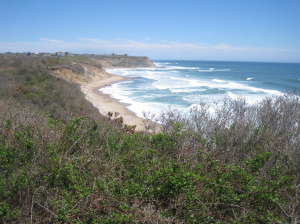 The view from the bluffs along Clay Head Trail.

There's the fresh air, the sounds of nature, the 17 miles of beaches, the lighthouses, the 28 miles of Greenway trails, the water, the wind, the animals, and the pace. And there's the people, who are relaxed whether they're one of the 900 natives or 12,000 summer tourists.

You won't find the The Hamptons' hype or the Cape Cod traffic.

Block Island is so unique that The Nature Conservancy named it one of the original “Last Great Places” in the Western Hemisphere.

You must explore beyond the Old Harbor, where the ferries land from Pt. Judith, R.I., and New London, Conn. And beyond New Harbor, where the Orient Point, N.Y., ferry docks. The island is comprised of one town, New Shoreham, which makes it the smallest town in the smallest state. It was incorporated in 1672.

If you don't have wheels -- bike, moped or car (all are for rent on the island) -- there are several taxi companies and all offer tours of the island.

Walking is how you'll encounter most animals. Block Island is a bird-watchers' paradise, from bluebirds and crows to egrets, ducks, gulls, and -- for the first time last winter -- the arctic owl. The owl population exceeded usually numbers due to a larger-than-usual population of lemmings to feed the young owls. More offspring survived so they needed more land mass to support their trek south. Block Island's habitat mimics the arctic plains so the owls felt at home. Amazing photos were captured by native photographer Malcolm Greenaway.

Deer seem more populous than year-round residents, and it's easy to spot them grazing on hilly fields or even ahead of you on a Greenway. Yesterday there was a beautiful one quietly chomping on leaves ahead of me while on the Harrison trail. We both stopped, stood still, looked at each other, and eventually he or she walked into the wood so I could pass. There are so many deer, in fact, that there's an annual culling in the spring to control the population. Many areas of the island post "No Hunting" signs to protect the natural landscape and animal life. There are also horses, ponies, cows, donkeys, alpaca (at North Light Fibers' farm), among others. 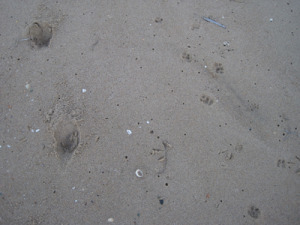 Sand prints of all types.

My first visits to Block Island where as a kid, when my family drove up the Connecticut shoreline to take the ferry and stay at a hotel. My brother started coming here regularly about 20 years ago when he crewed during Block Island Race Week, which draws sailors from all over the country. Now he captains his own boat, and rents a house for his crew, as is customary.

Race week features tough sailing conditions, competitive teams and festive party atmosphere with live music and sponsors like Mount Gay Rum (Dark 'n Stormy is the unofficial drink of sailors!). It's especially fun if you don't have to be up and at 'em at 7 a.m. the next day to prep the boat and make the starting line on time.

This year I decided to make a long weekend to explore the island solo.

I stayed at the Blue Dory Inn, a Victorian bed and breakfast just a block from the ferry landing. That weekend I walked many, many miles of beach, hiked Clay Head Trail, walked the Labyrinth (my first one!), and headed to the great North Light at the golden hour -- that special time right before the sun starts descending and it puts a warm hue on everything. 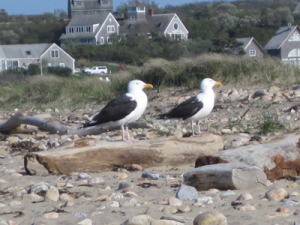 I walked past the lighthouse and carefully made my way through dune paths, surrounded by enormous gulls who seemed to paired off, to make it to this northernmost beach. To the left in the distance, I saw a dolphin carcass that had washed up. There was one large gull guarding it, and his lieutenants were a few yards back. A hundred yards back from them were thousands of gulls waiting their turn to get some of the booty.

It was incredibly organized, and the leader was being respected. By them and by me. I turned the other way.

There I spotted a large mass on the beach. It was a big, brown, old seal sunning himself. He lifted his head just enough to keep his eye on me to see if I'd encroach. I stopped in my tracks, turned right to walk across what was now a sandbar. The very tip of Block Island. I took about 10 paces and looked down. 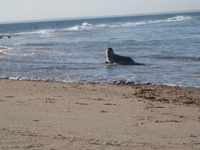 Wanna play? Surprise seal-spotting on the northernmost tip of Block Island in May 2014. Click to view YouTube clip.

There I spotted a sought-after jewel: A light aqua piece of sea glass. I picked it up like it was a diamond, so thankful that I had been led to it. I'm sure I was!

I sat down and a minute later noticed a young seal riding a wave into the beach. He played in the water, tossing and turning, and keeping an eye on me. He sauntered closer to me on the beach, then dove back in the water, and repeated this. (View video clip by clicking image at right. YouTube will pop up in a separate window.)

These were a couple of the many treasures I had on my May trip. I've been collecting sea glass since I was a little kid and it's hard to find since we've switched mostly to plastic containers and we recycle. And no one has ever mentioned seals at Block Island. I've since learned they make an appearance in spring when the water is still cold.

That trip in mid-May and this one in mid-September are shoulder seasons for visiting Block. Both times promise great weather, no crowds, and better pricing on accommodations. I enjoyed my long weekend in May so much that upon my return home I booked a cottage for a week. (The week prices drop in half!) 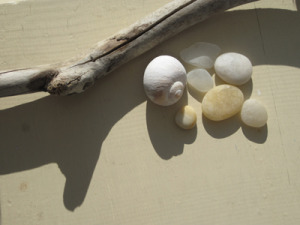 I'm saving my next visit to the Sacred Labyrinth until one of my last days here, as I did in May. Since I hadn't walked one before, I wasn't sure what to expect, but there was description in the center of it sharing the Mayan history and the process (have a question in mind, clear your mind, walk the path, and you will finish with peace, calm and step closer to fulfillment). Especially powerful was a small garden of statues with an altar of sorts and bench situated under a tree to the right of the Labyrinth. Inside a wooden box are notebooks and pens, where visitors record their thoughts, dilemmas, frustrations, prayers, hopes, dreams, and loves. Reading these messages really moved me; I could feel these people's emotions. I sent them positive vibes and prayers, and recorded my own thoughts. I'm looking forward to going again this weekend. 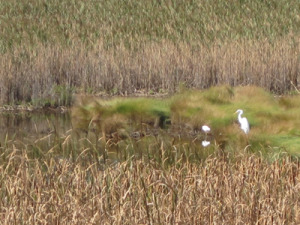 Egrets on a pond along Corn Neck Road, which leads to the North Light.

On Sunday, I closed up the rented cottage and met a realtor for a quick walk-through on a rental I'm considering for my next trip here -- during the high season, if I can last that long before returning. Then I drove to the ferry, and my car was first in line to board. With 20 minutes to spare, I walked across the dock at Ballard's and walked out on the jetty for a last scramble across the rocks and to add steps for my daily Fitbit counter. It was overcast but warm and it was a perfect send-off.

Block Island is tough to leave, and I hope to bring with me the uplift, calm, peace, and encouragement I felt and cultivated there. My spirit at Block Island is part of me, it doesn't reside on Block Island. Many people have a special place like this; and it's not about the place -- it's about how the place affects you. How do you feel there? What does it give you? Does it change your energy? How do you take it with you? Don't leave it there.

I thought about this as I gazed out the ferry's port side during the 55-minute crossing. I could see the beach where I walked for miles; the bluffs where I stood and felt the wind on my face; and the North Light where I walked along the east and west beaches, snuck into a driftwood lean-to, and finally saw the sun sink as the sky turned hues of yellow, orange, red, pink, purple, and blue, and then the beacon brightened. 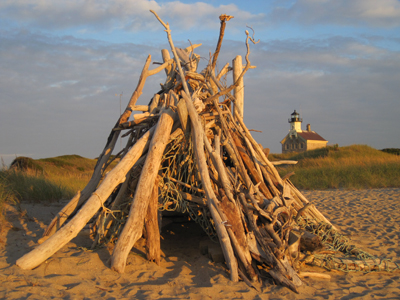 Lean-to made of driftwood at the northernmost point of Block Island.

As the ferry powered on, the clouds dropped down and the mist kicked up, the island receded into a ghostly gray and then finally slipped from my sight. I looked toward the bow and no land was visible.

For a few moments, the sea separated us from where we came and where we'd be. For those prone to seasickness, this could be a tough moment because it's recommended to keep your eye on the fixed land or the horizon. Neither could be detected at this moment and I couldn't help but thinking this is akin to the feeling of having no direction; when you're in between two points in life -- jobs, relationships, questions and answers -- and there's a feeling of unknown. You're not sure what's ahead and when it will arrived. You can't be sure at what pace you might be proceeding or if you're being held back. You don't know if you're on track or not. And for how long will you be here?

Without any context, it's tough to know where you are along the path.

Just as I trust the ferry captain to delivery me safely to port, I trust the Universe to lead me along the path. I'm in good hands, and I'm doing my part as a positive and engaged passenger along for the ride. 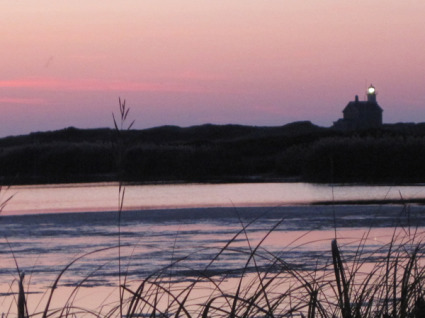 Sunset view of the North Light.

P.S.--I solidified seafood in my diet with a second dish! The halibut over squash ragout with chickpeas and capers at Eli's was something special. It was light and flaky so I didn't need a knife, and I finished every bit! 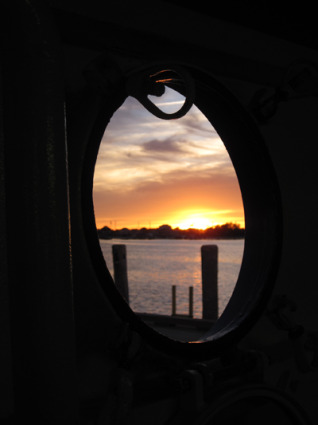 The porthole view of a sunset approach to Block Island, from the vehicle deck of the Pt. Judith ferry.

Nature inspires a step out of the comfort zone
I've been here three days now, and I am so inspired -- by the nature, beauty, everything. It makes anything and everything feel possible. It helps you to be your best self and encourages you to step outside your comfort zone.  Continue